He had his early education in Onitsha, Anambra State, where he combined trading at the Main Market and managing a horde of apprentices, with schooling.

He is the winner of the prestigious The Sun Newspapers’ Entrepreneur of the Year, 2019 Award – an honour bestowed on him by the management of The Sun Newspapers, in March 2020, for his entrepreneurial vision and dexterity in business, through which he has created wealth and jobs. He also won the maiden Dr. Michael Okpara Leadership Prize in Business. The honour came from the Dr. Michael Okpara Foundation, a charity dedicated to propagating the leadership ideals of the late Premier of the old Eastern Region. 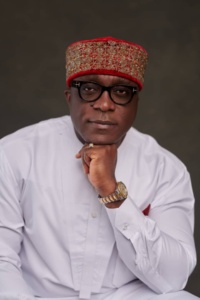 Okonkwo, who was in September 2019, awarded the Rotary International Youth Leadership Icon Award in Abuja, is an engaging public intellectual. In February 2020, he delivered the lead lecture titled Education: Challenging Mindsets for Tomorrow’s Leaders; at the National Executive Council (NEC) meeting of the Catholic Youth Organization of Nigeria (CYON), held at the Shanahan Hall, Basilica of the Holy Trinity, Onitsha, Anambra State. Before that in December, 2019, he also delivered the lead lecture titled, Ndigbo in Contemporary Nigeria: A Social, Cultural, Political and Economic Reflection, at the annual Umunri Colloquium at Enugu-Ukwu, Anambra State. In September, 2019, he delivered a lecture titled, Media, Democratic Governance and Development in Nigeria at the Media Summit of the Anambra Council of the Nigerian Union of Journalists (NUJ) in Awka. Same month, he also delivered another lecture titled and Giving Back to Society at the Faculty of Social Sciences, Nnamdi Azikiwe University, Awka in commemoration of the International Day of Charity.

Previously in August 2019, he delivered a seminal paper on ‘Sustainable Millennium Goals and Its Impact on Youths’, at an event to mark the International Youth Day, held at the Shanahan Hall of the Basilica of the Holy Trinity, Onitsha, Anambra State. In July 2019, he gave a keynote speech titled ‘Leadership and Service in the Nigerian Democratic System’, at the annual retreat of the Southeast Zone of Heads of Federal Establishments and Parastatals Forum, held at Golden Tulip Hotel, Agulu, Anambra State. In June, 2019, he was on the podium to deliver a lecture titled ‘The Media and National Integration in Nigeria’, at a colloquium by the Enugu State Council of the Nigeria Union of Journalists (NUJ).

A political economist with uncommon skills, Dr. Okonkwo, whose work ethic is guided by his personal philosophy of ‘don’t tell me about the storm, deliver the cargo’. He was in July, 2019, conferred with the prestigious honour of Business Philanthropist of the Year by the Nnamdi Azikiwe University Business School, Awka.

In the pursuit of his passion for philanthropy, he founded Pro-Value Humanity Foundation, a charity primarily concerned with recreating humanity through authentic human-centred development and reorientation of values.

In 2019, he endowed a research chair at the Nnamdi Azikiwe University Business School, Awka, to study the future of Igbo entrepreneurship as he strongly believes that the research will help drive innovative changes that will revolutionize Igbo enterprise and reposition them to become global brands.